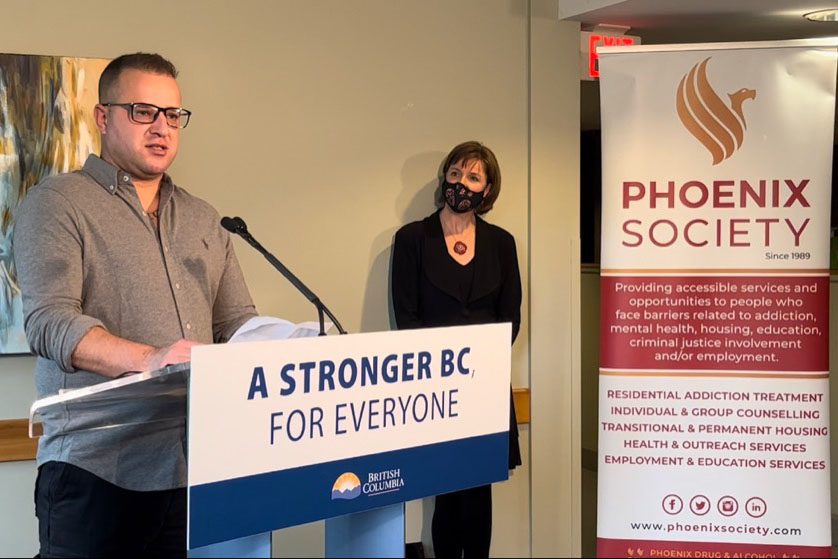 On the same day the BC Coroners Service announced another 333 people have died of drug overdose in B.C., the provincial government announced 10 new specialized addiction-treatment beds in Surrey.

A report from the Coroners Service shows that 333 lives were lost to suspected illicit drug toxicity in August and September, raising the total number of British Columbians lost this year to 1,534.

The 1,534 cumulative deaths in 2021 are the most in the first nine months of a calendar year and represent a 24 per cent increase over the 1,240 deaths recorded between January and September 2020. The provincewide death rate stands at 39.4 per 100,000 residents, nearly double the rate in 2016 when the public health emergency into substance-related harms was first declared.

Mental health and addictions minister Sheila Malcolmson was in Surrey Tuesday (Nov. 9) to announce the new treatment bed program at Surrey’s Phoenix Society, where all 10 beds are to be located.

“It’s heartbreaking to see so many lives lost in August and September due to the drug-poisoning crisis. My thoughts and sympathies go out to all the families who have lost a loved one,” Malcolmson said in a statement prior to the announcement.

The treatment beds are for adults who need help with severe substance-use dependency and mild to moderate mental-health challenges. While located in Surrey, the beds are to offer care to adults throughout the province, including individuals involved in the criminal justice system. The province said the beds are to complement regional treatment beds and provide another step for people who need intense services and support.

“It is crucial that treatment programs be expanded amidst the ongoing drug poisoning crisis that is taking six lives every day in British Columbia,” Macdonald said. “With this investment, we will see increased access to treatment and recovery services right across the province, including those existing the criminal justice system, a group known to face elevated risks within their first months following release.”

While inside prison, Mendonca connected with the Phoenix program and was able to stabilize his life. He’s now a peer-support worker with Phoenix. He’s set to graduate with his social worker diploma from Vancouver Career College in January 2022.

“Being incarcerated makes it challenging to navigate information on resources related to treatment programs. Given this, it’s my goal to help alleviate the stress of individuals looking to enter similar programs after they are incarcerated. These new beds are a good step forward in helping streamline the process and are going to make a huge difference,” Mendonca said.

In addition to the beds, the province announced people with substance-use challenges in the Fraser Health region will have access to new and expanded regional services, including expansion of the virtual health clinic, the new Addictions Medicine Consult Team (AMCT) at Burnaby Hospital and enhancements to existing AMCTs at the Royal Columbian and Surrey hospitals.

“When a person living with addictions is ready to take a step toward recovery, we want to help. That’s why the new substance-use beds in Surrey, along with Fraser Health’s new addictions medicine teams and virtual clinic, are so critical. People in British Columbia will have access when and where they need it – be it in a hospital emergency room, an urgent primary care centre or a shelter,” Malcolmson said.