Jan. 8, 2021 – Prior to arriving at Phoenix Society, Tim Page hadn’t touched his guitar in close to two years.

But soon after entering transitional housing along his recovery journey, he learned of Phoenix’s Music Therapy Program. He then discovered there was an opportunity for residents to record their original songs and be part of a music album.

Tim is one of more than a dozen residents who recorded their music as part of the eclectic album that has just been released, titled “The Phoenix Album Project: Hear Our Voices.”

For many at Phoenix, music is truly therapeutic. A way to express one’s self.

“Music was a pretty cathartic thing for me,” said Page, 38, who has been at Phoenix since July. “I guess I had a hard time expressing myself in just normal day-to-day conversation and I just felt pretty locked inside of myself but it seemed like through music I could communicate what was going on inside of me and I could express myself. I guess it’s kind of human nature. Music was the best way for me to do that.”

SCROLL DOWN TO LISTEN TO ALBUM

JUST RELEASED! We are SO PROUD of our residents for all their hard work on this music album. Months of dedication went into this project and we hope you'll check it out!

Listen to the eclectic album at this link: http://phoenixsociety.com/news/hear-our-voices-phoenix-society-residents-explore-recovery-in-new-music-album/

SCROLL DOWN TO LISTEN TO MUSIC ALBUM

Tim said the glamorization of drugs and alcohol in the music industry was something that greatly impacted him in his 20s, and he battled to become sober with limited success.

“I was a chronic relapser,” he recalled. “Maybe there was emotional turmoil inside of me, and I medicated myself through it.”

But Tim has a newfound passion for his music in sobriety and says it’s helped with his self esteem.

“Music, it kind of makes life worth living in a lot of ways. Lots of times life can be mundane. Life can be really boring and it makes things feel more alive. It taps into a deeper place in the soul.”

David Hetherington is another Phoenix resident whose original work is on the new album.

He’s been playing music since the age of 15. Like Tim, David said music helped him express his emotions, particularly during darker times.

“I would kind of use my songs and singing and my guitar playing for my own music therapy. Whenever I feel down I would play my guitar,” said David, who has been with Phoenix Society since February 2019. “For me it was always songs of trying to get over my depression, trying to see a rainbow at the other side of the tunnel.” 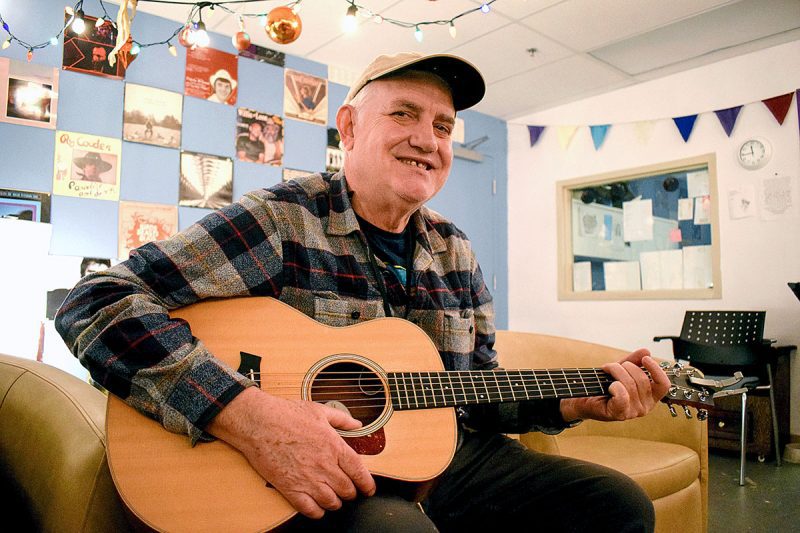 Recording his music was on David’s “bucket list” and said the process has helped him come out of his shell.

“It’s the only song that I’ve completed in my life and it has a lot of meaning. It’s a bit of a funny song and it points towards the fact that we’re all human. We’re all imperfect. There’s no perfect person in this world. We’re all human, we all make mistakes, we all have a past and how in some ways were we all have this kind of sameness.”

Felicia Wall, Phoenix Society’s Music Therapist, has spent countless hours recording, editing and producing the residents’ content. She has even performed alongside some of them on the album.

“It’s very eclectic,” she said of the album. “There’s a bit of everything. And a few staff have gotten involved and recorded songs also. There’s a lot of original songs, a few covers, country, rap, poetry, we’ve got it all here.”

Wall said she feels grateful for the residents to have entrusted her with their songs, most of whom have done music in their lives for quite some time.

“I really wanted to showcase that they have amazing things to say,” she remarked. “And amazing music to give to the world. Everyone has something to say and a different way to say it. I think the experience of people going through addiction and mental health is often not told from their perspective.”

Wall has watched the residents gain confidence and self-esteem through the process and said she has witnessed “the authentic transformation of the individual, going from a place of hopelessness to arriving in a place of hopefulness.”

More Music Therapy opportunities at Phoenix would greatly benefit residents in their ability to connect to their emotions, their self-expression, their group-cohesion and their confidence, according to Felicia, who currently has funding to operate her program two days per week.

“The sheer volume of residents that Phoenix houses on its main location would be enough to keep the music therapy department busy five days a week,” she explained. “They are eager for more music, and we are eager to be able to provide it for them.”

Phoenix Society thanks Music Heals for providing ongoing financial support to the Music Therapy Program since 2016 (between $6,000 and $8,000 annually). The music album project was made possible thanks to additional funding from Music Heals in 2020 as well as a one-time $1,700 grant from the Hamber Foundation last year.

The rest of the program is funded by Phoenix Society, which increased its budget for the program in 2019 to allow for two full days a week of Music Therapy.

With more funding to expand the program, Felicia hopes to one day be able to offer “Rock Band” or “Choir” or “Drum Circle” programs. She would also love to be able to offer Music Therapy to other Phoenix facilities that have requested access to her program.

Email [email protected] to get involved.